One leaf, one message, one prayer

The sound of a little voice rises and then trails off in a gentle autumn breeze. The rustle of a single leaf is drowned out by the reverberation of countless leaves clamoring in the wind.

One leaf, one message, one prayer that wishes to be heard above the noise and commotion of the forest. What is in the heart of this one leaf that so wants to be heard, and to be listened to?

All the colors of the leaves are on full display in the Autumn season, it’s the fall of their life cycle. A life cycle which began as a tiny bud in the early spring. A bud which signaled to the world that winter was waning, relenting to the warming winds of spring. The winds of rebirth, which carry upon it the sweet fragrance of life and new beginnings. The same winds that carry the song of Kokopelli, announcing his arrival.

the season peaks and the days are long, the element of fire reigns upon creation.

The tiny leaf which sprung forth in its childhood as the flowering bud, revealing hues of color and releasing its delicate scent. It called to the insects, to the birds, signaling the celebration that is the season of rebirth and renewal.

This same leaf in its adolescents which grew stronger and larger, evolving into its purpose. It matured in its preparation for the long days of Summer. As the days went on, it helped to sustain the tree. Each day the leaf would collect the sunlight, which in turn would nourish the tree. Collectively, all the leaves would provide shade, a place of respite for living creatures from the intensity of the summer sun’s rays. As the season peaks and the days are long, the element of fire reigns upon creation.

During the season of living there is uniformity of color, and of purpose. The leaves work as lungs, breathing in the exhaled breath of all living creatures. The tree’s lungs exhale the life-giving, oxygenated air that mother earth’s creatures all inhale.  The relationship is symbiotic in that the plants and the animals provide the breath that the other depends upon. The exhaled breath of the trees breathing for mother earth, purifying the air.

“All things share the same breath the beast, the tree, the man, the air shares its spirit with all life it supports.” Chief Seattle

This single leaf approaches its old age, the autumn of its life. With the sun waning, and the temperatures beginning to chill, its time to transform. The leaf signals to all creation by changing its color, announcing the end of summer. The Autumn winds welcome the season of the great harvest. This is the time to reap the bounty of the growing season. Its time to gather and store for the barren days of winter. Winter the season to seek shelter, the time of reflection.

My attention returns to this one tiny leaf as it dangles from high above. The autumn winds gust, dislodging its kin from their branches, sending all on their final journey. It is the end of the harvest,  the final cycle of life , and death approaches. For all that has a beginning, so too must have an end.

I stood watching the leaves, studying the varying displays

I look on, noticing some leaves falling unceremoniously to their end. They plunge as stones, plummeting in a rapid descent crash landing upon the earth below. I notice other leaves that have dislodged, they begin spiraling out of control, frantically trying to avoid the inevitable. While some fewer leaves are seen riding upon the wind. They journey in a rhythmic fashion, back and forth, landing more gently upon the Earth.

I stood watching the leaves, studying the varying displays that would occur as they approached this final stage. I noticed there were those that clung to their branches, refusing to accept the inevitability that their time had come to an end.

The stronger gusts would dislodge vast numbers of leaves too numerous to count. In these dramatic displays there were scenes of chaos right along side of those surrendering in uniformity. I observed all the patterns that presented, as though the leaves were choosing a certain way to face their end. It seems they had grown most attached to their present form, and to life.

This performance was reserved for only a single observer, a chance witness

Of all the varying displays that I observed there was still that tiny leaf, that stood out above all others. This single leaf, beautiful in color, now began its fall. The leaf began to twirl gently, as though it were dancing gracefully as a ballerina. It had full control of the rate at which it descended. I watched as it preformed the most beautiful and delicate dance. It was magical to witness such grace in it’s every move, an outward display of breathtaking beauty.

This aerial display culminated in the most gentle and graceful landing of all. Had there been an audience, I imagine all in attendance would rise to give a standing ovation for this performance of a lifetime. Perhaps this beautiful leaf, this tiny dancer would take its final bow as the curtain closed.

Instead, this performance was reserved for only a single observer, a chance witness, a lone adoring fan. Tears sprung forth as I reached for my heart, the ache within my chest overwhelmed me. When the heart is touched in such a profound and beautiful way, it’s all one can do to hold on.

I gave thanks to this leaf, and expressed gratitude to all of them for teaching me. In this time within the forest, I learned not only the many ways to face death, but how I might wish to live until my final breath.  I discovered how I wish to show up in the world, and that is with beauty and grace. I discovered the depth of my heart, and learned a way forward, thanks to that beautiful,  tiny dancer. 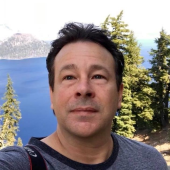 Shanon Harwood on the Archetype Project

Moment of Silence by Hilde Pols